Neon. Holo. Jellies. Heaven on Earth by Beyond the Nail 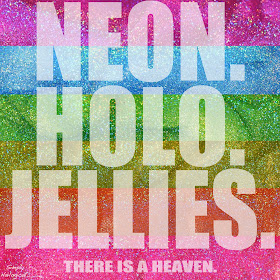 Enough said right there. As I've said before, I don't always swatch polish, but when I do, it's cause it's f&#%ing awesome. This is Beyond the Nail's summer galaxy collection, which includes six neon holo jelly polishes. You just died. Please know that I will not be held liable for the circumstances that led to your death.

I have a full review* of these polishes with macro pics after the jump - but tiny hint - I LOVE THEM. 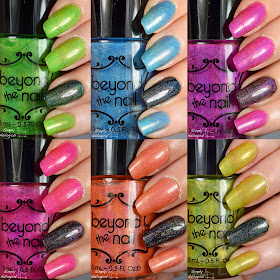 Before I jump right into the holo jelly goodness of each polish, here's the conditions under which I swatched these photos:

A couple notes on the opacity of these polishes: The collection is described as jelly polishes that require three coats to build up to full opacity, but as you can see, in my shots my nail line is visible. I honestly think that maybe this has to do with the fact that I now have much thicker nails than ever before (thanks to Bliss Kiss, but that's another story), and so the white tips of my nails are super thick and opaque, compared to previously when they were a little more translucent. I also did three very thin coats to avoid thickening of the jelly as one should apply any jelly polish, and perhaps during testing Beyond the Nail did a mix of thin and slightly thicker coats to achieve full opacity in three coats. Either way, you could probably get there if you do a slightly thicker application on the second or third coat.

First up, Comet, a neon green holo jelly polish. Pictured is three coats of bright green goodness. The formula was absolutely perfect on this one, glided on nice and smooth. Even with just one coat it was surprisingly even, and if you were into the very sheer green look, then you could do one coat without worrying about streaking. This is evidenced on the accent black nail, where I've put just one coat. See how the polish maintains its tinted colour but the holo really pops? Holo topper hell yes! 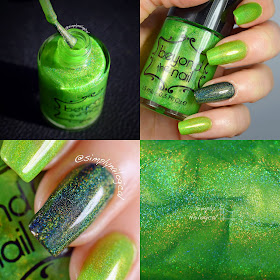 Next up is Asteroid, a neon blue holo jelly. In terms of neon-ness this one is probably the least so of the bunch, but let's be honest, it's hard to find let alone describe what actually constitutes neon blue. Neon blue might very well be an oxy-moron in the nail polish world. This is more like a bright azure blue. This is the only one of the bunch that took me four coats to reach the equivalent opacity of the others, so it is a slightly thinner formula. No complaints though, because I'd still rather a thinner formula that can be built up in thin layers than a formula that is too thick and gets goopy, lumpy, an all that yuck. Asteroid went on super smooth and it's one of my favs in the collection because, well, I love blue. I definitely see myself using this polish as a holo topper over a navy blue creme... I mean wow! Holo starry night much? 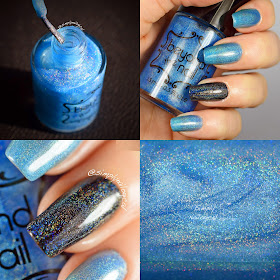 Next up is Nebula, the collection's purple holo jelly. Of all the polishes in the collection, the two most similar are the pink and purple, so if you're looking to narrow down your purchase, you could probably forgo one of these two. Nebula is a magenta-purple, much more pink/red learning rather than blue/indigo. It applied like a dream, three thin coats, and if I had to rank the polishes from the thinnest formula to the thickest (in terms of opacity building), Nebula is right smack in the middle. In the bottle the polish actually looks a teensy bit darker/more intensely purple than on the nail. However, if you were to layer this over a nice plum creme, the violet undertones would probably come out more and your mani would be simply fab. 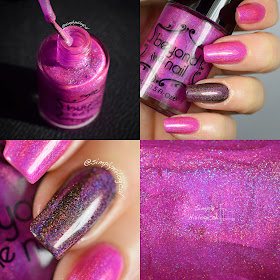 Here's Supernova, which I think the collection's most neon polish! This is truly electric pink/magenta/fuschia. Its formula is the thickest of the whole collection, and I could have gotten away with just two coats, but I did three very thin ones here and my nail line is not as visible as with the other polishes. I LOVE this polish over black though, I mean, that pink, WOW. It truly sparkles and it maintains its rich pink pigments enough that it's very obvious it's a pink holo topper. Or so I've discovered. I'm not really a pink person, but I could see myself layering this over dark polishes. And if I ever had to do Barbie nails, this is it. 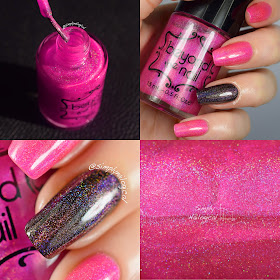 The orange number in this collection is Solar Flare. It was a teensy bit on the thinner side compared to the pink and the purple polish, and it is more of a red-leaning orange than yellow-leaning. This is three thin coats and one coat over the black creme nail. Again application was very easy, no struggle or evening out frustrations. I'm pretty sure construction companies need to dunk all their orange cones in this formula, cause then the roads would be pretty. 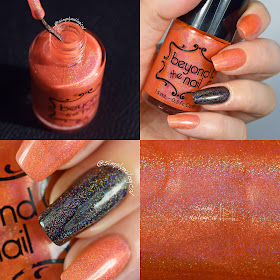 Lastly, we have Shooting Star, a green-learning yellow holo jelly. Like the blue, this one is not so much 'neon' for me as it is just bright. It has a golden tinge to it, which looks stunningly regal over black. I think this polish used as a holo topper over a rich espresso brown creme would be so sophisticated and gorgeous, and I'm going to go as far as dubbing that combo a work appropriate mani, cause yes, according to me you can wear holo polish to the office if it's this awesome. 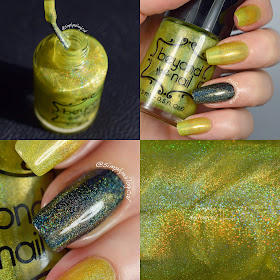 Who needs some water? I do. My mouth ran out of saliva drooling over these swatches all over again. Grab a quick glass and then get back here for some culminating group shots:

Should you get your hands on these? Yeah, you probably should. They are so versatile because you can build them up on their own, layer them over a complementary creme base, or choose a dark polish to layer them over for a holo topper effect. You could probably even make holo jelly glitter sandwiches with these! My head hurts just thinking about all the combinations.

You can buy all six of these holo babies for a discount price of $45.00USD plus shipping or buy only the colours you wish for $10.00USD each from Beyond the Nail's Etsy shop. They are based out of the Toronto, Ontario, Canada area, and they ship internationally! Man I just love it when an indie polish line has awesome formulas and such a unique product! Makes supporting them all that much more rewardable and worth it. They also sell nail vinyls, studs and other must have nail accessory products for all of us crazy nail art lovers.

If you have any questions for Maddy and Krystyn, the makers of the indie polish line Beyond the Nail, I'm sure they would love to answer them cause they are super friendly and love nail polish too (clearly!). You can find their contact info on their Etsy shop, and they are also on Facebook and Instagram.

Wishing you all holo dreams tonight!

*Polishes discussed in this post were provided by Beyond the Nail for my honest review. All opinions, photographs, and commentary are my own.
simplynailogical at 7:09 pm
Share