Nailing and failing: Sometimes we screw up so let's SHOW EVERYBODY

Sometimes what it looks like in my head is truly far better than what comes out on the nail.

I've had a couple 'nail fails' in the past year that I never ended up posting, each for different reasons, but mostly because I was like CRAP THOSE ARE FUGLY. But whatever, let's share the fugliness and let everyone know that I too mess up! I'm actually a normal person behind these nails, like I have a face and everything, wow who knew.

I got the idea for putting together a 'nail fail' post from Narmai from Piggie Luv, who blogged about her own self-professed nail fails here and here. Narmai is not only shameless in her sharing of what she calls nail fails (though I would argue this to be the case for more than a few of them), she's also extremely creative and takes nail art to the next level! Like these 3D troll nails, how amazingly insane, right?!

In any case, here's the simplynailogical edition of nail fails.... you might just call them simplynotlogical... and as such, a #simplynailfail. 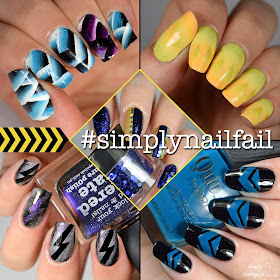 Um so I know what you're thinking... what the fack are those?

Yeah idk either. Obviously I had an idea in my head that just didn't work and ended up looking messy or like it made zero sense.

Let's begin a trip through the darker days in my nail art adventures...

Yeah so the idea in my head for these was the I would sponge on some light holo around the lightning bolt vinyl and they would be like cool and glowing-like. Well it just looks messy, really. 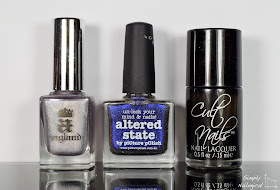 2. This re-creation mani does fashion no justice

This was my first attempt at a mani swap with Dorra of Didoline's nails - her version inspired by fashion was beautiful, and then idk what the hell happened to mine but the arrows are all slanted and shit and this was shot in a weird phase when my nails couldn't decide whether they wanted to be squoval or rounded so they were all like squoroundedandshieeettt.

What do you mean, glitter placement is about carefully placing glitters?! I just threw on some glitter and thought I could be all perf like Polish All The Nails.

What the fack is this shit?!?! The sides of the hexes don't even line up... it's like I just threw up some loose glitter on my nail and hoped it'd turn out. WRONG. 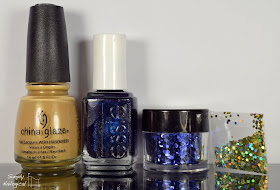 4. The ugliest most unhappy sun-rays you have ever seen

So when people say to pay attention to your colour choices in nail art... like I, erhm, may or may not have said in my Gradient Guide... this is what they mean. This combo of colours DOES NOT WORK. The lemon-limey holo makes the neon cremes look like they wiped their ass in dirt. Sometimes I can't help but add holo, even if it means forcing it into a mani. I TRIED GUYS I TRIED. Ps. This is a scaled gradient. 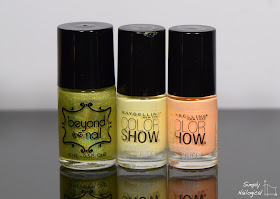 I'm no one-stroke nail art master, but for whatever reason when I did these nails I obviously believed I was. In my head it looked like a 3D ascending braid, and then when I started doing it I kept confusing myself and flipping the colour order back and forth and then I just got angry and kept going even though I was obviously doing it wrong. NAIL FAIL FURY I TELL YOU

I only took one pic cause I was 110% sure these would never see the light of day unless I was attending Woodstock. 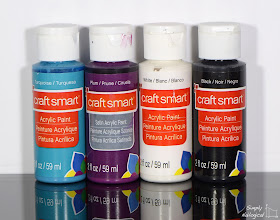 And so there you have it, five of my nail fails that I hated enough to take only a couple pics and then throw them in my 'NOPE' folder to be buried forever... until now when I decided what the hell let's show everyone some nastiness. Don't be shy, share your fugly manis with the world! And tag them with #simplynailfail if you want me to see and comment on how fugly they are too :D